This time we look a bit at parallel extensions library for .NET. This library intended for speeding-up work for multi-core cpu. If you want to speed-up program in this way -you need:

This library was tested on Intel Core2 Duo machine with the help of C#.
Testing procedure:

C# code which did all measurement comparisions between sequential and parallel executions is here: 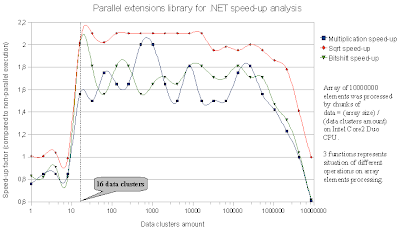 There results is displayed as XY graph of speed-up factor dependance on data clusters amount.
Clusters amount scale is logarithmic.

Several conclusions that can be made from this graph (and this test):

So all in all - its good that we got this library for .NET. It simplifies a lot writing efficent algorithm for several cores. But.. as we saw- we need to remember that its not enough to have this library for multi-cores enabled code. We need to optimized it for that- Splitting jobs between cores is a different world of programming.