This time I wanted to learn Android development. I've tried to choose some interesting idea for test Android project. So i came to final project mission - drawing user movement path using magnetometer as a compass. You can use this app as a helper to orientation in unknown place or for example it can be used to chart scheme of apartments in some building. I've used this app to draw my flat scheme :-) You can download sources of this application from Google project hosting of my project. I've called this app PathRecorder :-) Structure of code:

Basic usage of activity is: Creation/setup of view which will used for drawing; setup of UI interaction (On Touch listener,etc.); magnetometer sensor setup; initialization of various classes used for project (such as Storage of app data, MenuManager for showing user menu, etc.); starting some threads for program state monitoring.


Used for saving information about current active menu item in UI, such as - menu text and program state which will be fired when user will switch to this menu item. (All communication between application components goes through ProgramState object, it's like a state machine :-) )


Holds class MovementStatistics, which is used for computing some information about current movement path, such as - time traveled in some compass direction, times user rotated clockwise or counter-clockwise, etc. Movement class itself stores LinkedList of user moves, appends nodes to this list as user travels in some direction, communicates to magnetometer sensor fetching current user direction relative to North, converts movement data into representation suitable for drawing movement path in a view (returns Path draw object for canvas).


State machine of application - integrates all application components, so that all components could interact between each other and user interface. Also some threads monitors program state and changes it by calling "check..." method in ProgramState class (for example,- calibration monitor thread informs ProgramState when calibration is finished and UI can show menu for a user...). 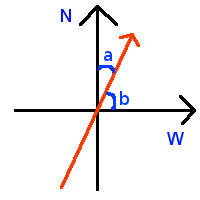 So by having magnetometer data we can calculate (a,b) angles in a following way:

The only problem is that calculated angle a is in range 0,180 degrees, and we need full range of -180,+180 degrees. So we need to decide sign of a angle, which can be determined from angle b. By doing that we get full direction to North angle formula: 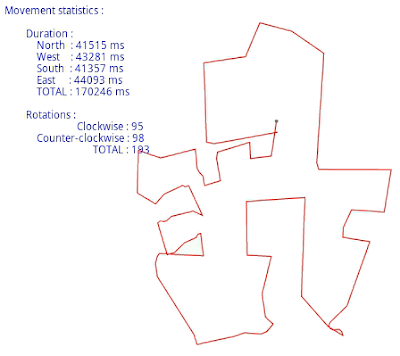 Some explanations,- starting from lower-right corner and going clockwise in picture you will get such rooms: kitchen, bedroom, WC, bathroom, sitting-room.

Have fun developing for Android and using sensors !